Recently I’ve reached a plateau. Over the last month I’ve reached a certain level of competence as a snowboarder. Nothing amazing mind you, but I’ve reached a point where the blue runs tremble in fear at my approach. I would be hard pressed to say this isn’t a good thing, after all I am certainly enjoying my hat staying above my shoes for most of the day, but over the last few trips up to the mountain I haven’t really gotten any better.

Here’s the question. Should I start pushing myself to do harder things, or should I spend some time simply being content with the skills I’ve acquired so far?

The truth I think is less black and white and more gray. Plateaus are our greatest accomplishments and also our biggest barriers. Since we are infinitely adaptable (well ok, there are probably limits) we will plateau thousands of times throughout our life.

They key seems to be being able to live with a kind of cognative dissonance that both enjoys and appreciates the contentment of a plateau, while at the same time nurturing a sense of discontent with the status quo. To experience both feelings simultaneously.

I find that reframing the excuse helps to break the pattern of feeling victimized or trapped by my excuses. By turning the self talk from a exercise in victimization into a statement of intent I’m rejecting the idea that it is impossible to overcome my excuse.

Truth be told, often times those limitations are not nearly as limiting as we think they are. People are capable of great things when they set their will to something. Often we can surprise ourself with the results of our honest efforts. We all have limits, but those limits are often a matter of quantity, not quality. Anybody can write one really good essay, but it’s much more difficult to write ten really good essay’s a month. Even more difficult to write ten good essays a month if you are also working a full time job and playing in the co-ed rec soccer league.

When faced with so much quantity of life to live, it’s easy to reply on the excuses to determine what we do or do not have time for. Something important to remember when faced with so many opportunties though. We get to choose what we want to do. Nobody decides for us, and when we make excuses we’re taking the easy way out. By giving the power to the excuse we’re minimizing our choice.

“I’m never going to be a great snowboarder because I started so late in life.”

“I don’t want to be a great snowboarder because I started so late in life.”

The first has a childish, impotent sound to it. I’m making up an excuse for my substandard snowboarding prowess. The second almost invites a follow up statement…

“I do want to be a compentent snowboarder because I enjoy it.”

Instead of being a victim of my age, I’ve instead reframed my goal to make it something more attainable, and attainable goals are more fun anyway. 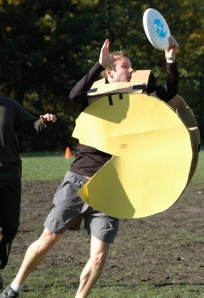 pacman for the win!

A friend and I were talking about Ultimate a few weeks back and an interesting topic came up. My friend expressed his affinity for the offensive side of the game, and was wondering what could possibly be as much fun about the defensive side. I happen to like playing defense so this was an interesting question to me.

We got into the relative pluses and minuses on either side while watching some college football and the conversation ambled towards what could be called an answer.

On the offensive side, the fun part is pretty obvious. Everyone recognizes the handler that threads the game winning throw. Same with the receiver. It’s easier to forget the rest of the offensive, but usually we don’t mind so much. After all, our team just scored.

The life of a defensive player, especially in casual leagues can be very different. You can play your heart out, and make some significant impacts, and your teammates can royally screw you over by blowing their coverage, their assignments, or by failing to give their full effort. Keeping the other team from scoring requires everyone on the defense to be playing effectively, and unfortunately you can’t really force your teammates to play any harder or smarter than they already are.

That’s why defense is really a mind game more than anything. Defensive players will have a lot more fun, and be more successful if they adopt a “not my guy, not this point” mindset. The defensive player’s goal is their designated space, or their designated mark. Keeping them from making that game winning play is the most important thing. Defensive players like to go up against the taller, or faster opponent. It gives them greater satisfaction when that guy doesn’t touch the disc for a whole point, even if the other team scores.

For a defensive player you have to accept that sometimes you may lose the war, but that’s no excuse for losing the battles.

Peeling the Onion of Responsibility

When you are working on solving a problem, you become emotionally invested in the solution. It’s natural, it’s your baby, you love it, you brought it to life.

Unfortunately, sometimes we fall in love with the wrong solution. It’s no great failing, it’s just the inevitable consequences of being passionate about our work. Any time we create, we face the risk of falling in love with our creation, and sometimes that creation missed the mark.

The deeper we go into a discipline, the more likely this is to happen, especially in software. In order to trully solve a problem we need to understand it inside and out, and in the process of coming to greater understanding, we often forget how the world looks outside of that specific problem.

Every individual is making the right decision for their area of responsibility (especially the CEO), but by focusing on the details, they’re missing the rest of the picture.

In a functioning organization, information flows the other way.

Too much meddling across these boundaries and the team cohesion falls apart. If you don’t trust someone enough to let them work on their areas of responsibility you have a staffing problem, not a control problem.

Even if you don’t have enough employees to separate these out into discrete functions, each role needs to be played. Better entrepenuers will be able to fill multiple roles within their company.

The best team members are the ones that know other concerns need to influence their actions, and seek out input when they reach crossroads that could impact the responsibilties of others.