how I smashed my tv 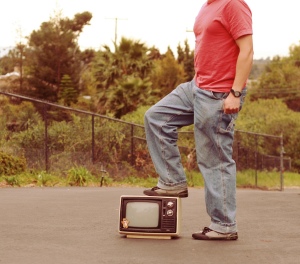 It’s about time I address the namesake of this site and talk about smashing televisions.

It can be hard to leave behind your tv. As I mentioned in the eulogy, for me it was a multi-step, multi-year long process. Smashyourtelevision’s post on the subject inspired me to document my journey in more detail.

The main reason I was so attached to my tv is that there is simply no easier form of entertainment. TV executives have built their entire careers around trying to determine what kind of television you would like to watch, and then putting it on at the right time of day to line up with your work schedule, your moods, even your demographics. Since everything is done for you, all that is required is make a single decision… to watch.

The first step for me was to take the programming decision out of the network’s hands. I started watching more of my content digitally via iTunes and Netflix and DVR (digital video recorder). Once I had started making programming decisions for myself I was much less likely to spend an evening watching “whatever was on the discovery channel”. The quality of the television I watched went up dramatically. I became a more discerning consumer.

The next step was to eliminate the cable delivered content entirely. I had been using a third party TiVo-like device, which fell out of favor and was no longer supported by the manufacturer. Rather than replacing it, I started going without DVR. And since I no longer had the patience for commercials, I shifted all of my watching hours to either TV shows I had purchased from iTunes, or Netflix DVDs. I still liked to watch sporting events, but decided that most times I would rather watch those with friends anyway. Once that decision had been made I was able to cut the cable. The biggest sacrifice I had to make at that point was the sports programming.

About this time I picked up a few extra activities outside the house that kept me busy in the evening hours. Crossfit and Ultimate frisbee had supplanted television as my primary source of diversion during the evening hours.

I still had a 37” tv that was connected to an XBox for Netflix streaming and to serve as a DVD player.

After a year or so in that configuration I moved from the Ballard Neighborhood in Seattle to Bainbridge Island with the knowledge that I would be moving back in about a year. The GF and I intentionally arranged our living room to minimize the impact of the tv and as a result I found myself watching it even less. It had become more convenient to open the laptop and watch a movie on the external 24” monitor than to watch on the 37” tv across the room. Upon the realization that I would have to move this monstrously heavy thing back to Seattle is what finally pushed me over the edge.

I unloaded the tv and the xbox on craigslist, (talk about a depreciating asset) and haven’t really missed it since.

Here are the key points I learned in the process.

1) Take it one step at a time: If I had gone from a 3-4 hour a day tv watcher to nothing overnight I think I would’ve gone crazy.

2) Slowly decrease your tolerance for bad tv by watching only good tv: The beginning of this whole process was my decision to adopt DVR and Netflix. In the short run they probably increased my tv consumption, but allowed me to become more discerning.

3) TV is a hobby, and is best replaced with other hobbies: Even though I no longer have easy access to tv, I will still watch it if I find myself home alone between the hours of 6pm and 8pm.

Additional reading at the happiness project